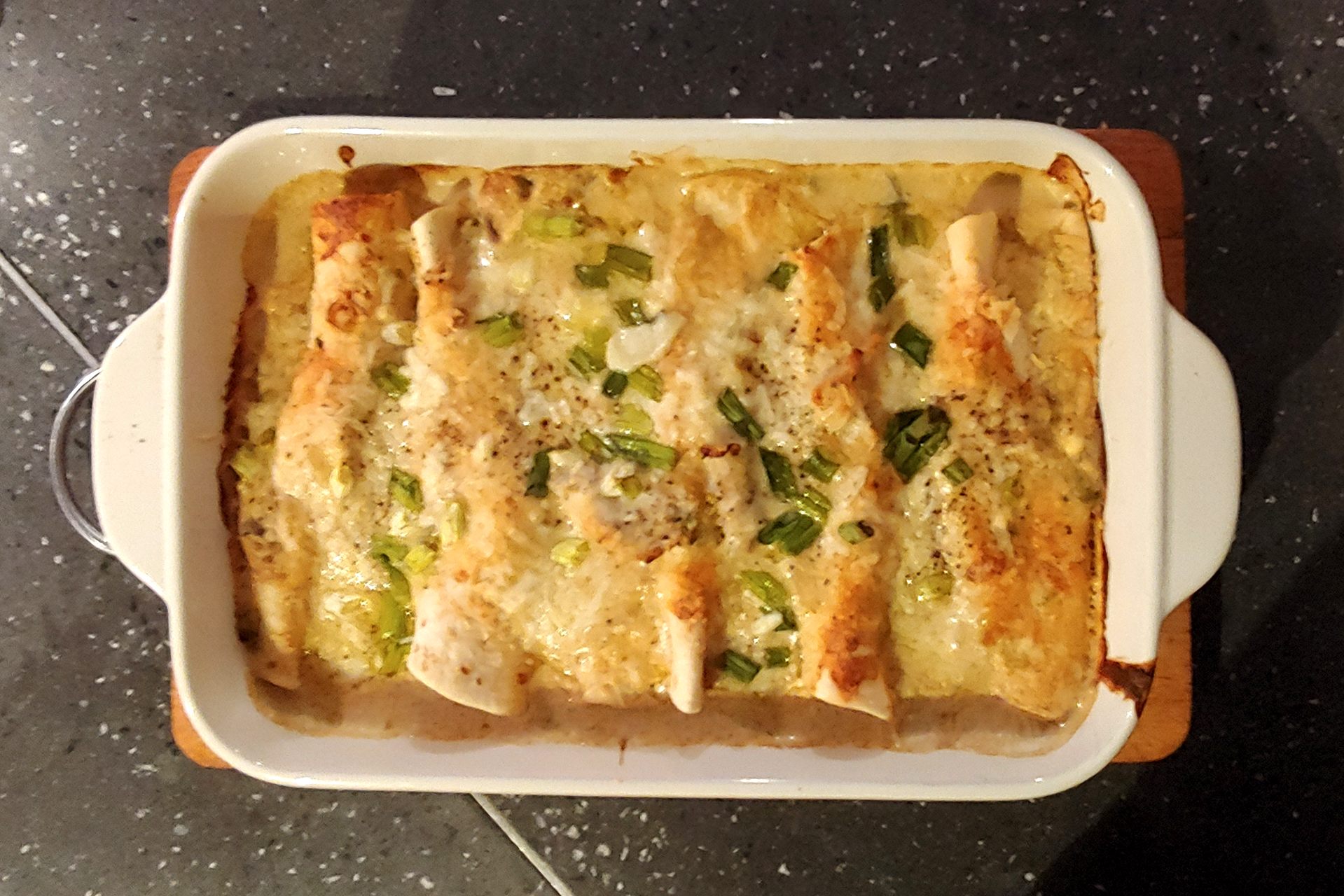 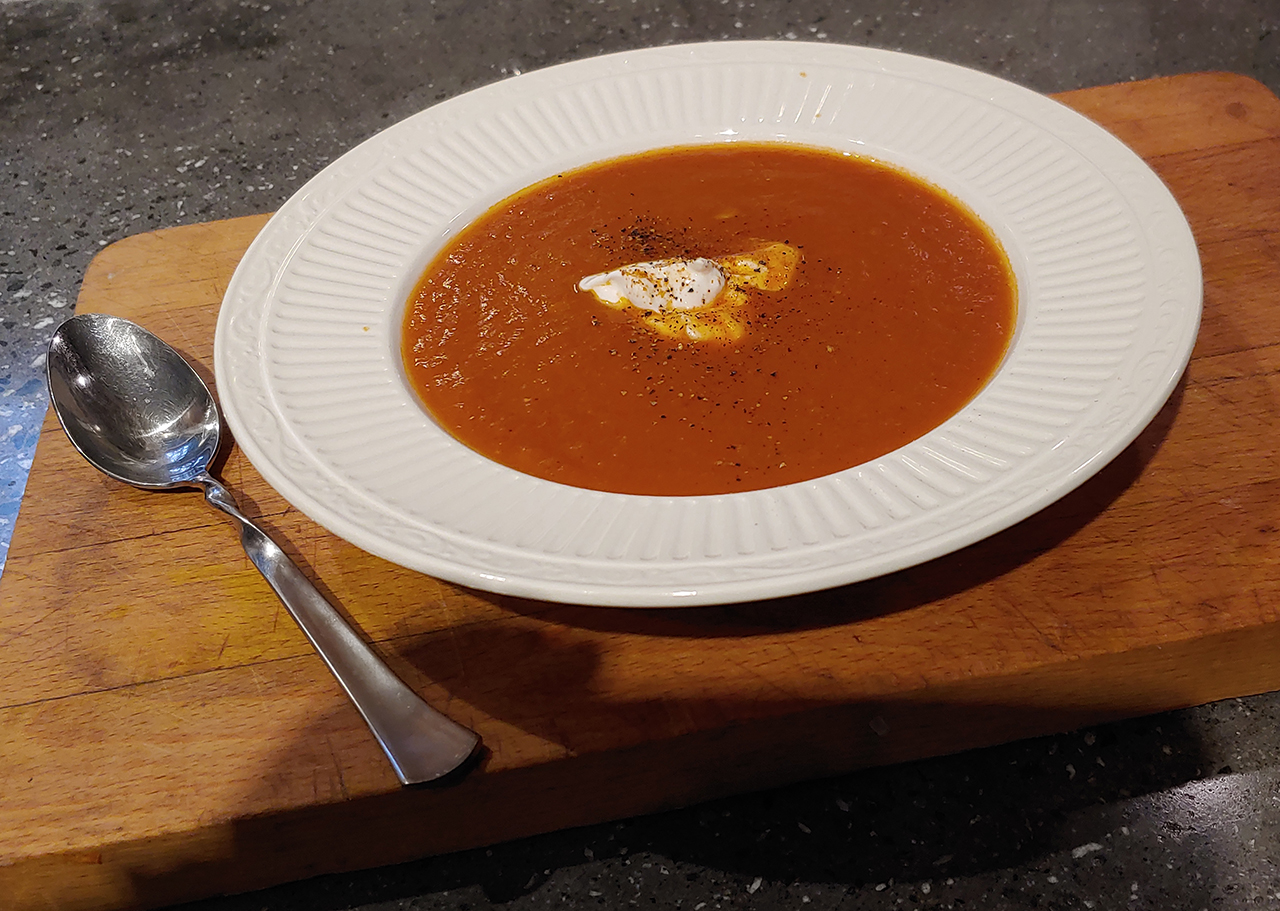 Food for a new beginning

Monday night Donald Trump told the nation that his ‘authority is total’. Initially it rendered me speechless. But speechless isn’t effective.

No, Mr. Trump, you do not have absolute authority. Not morally. Not ethically. Certainly not constitutionally. You are nothing more than a two-bit showman, a con artist who occupies what used to be the most powerful and influential position on the planet. You have diminished that position to what will go down resonating like the fall of Rome. A crackpot and self-styled dictator – you now have blood on your hands. As the county wakes up to the repercussions that your incompetence covered by selfish bullying have unleashed upon our people.

Yes, you still have the job. You have a great number of enthusiastic followers led by an entertainment network claiming to be news that has declared unadulterated fealty to you. Perhaps if FOXNEWS was all I watched I’d drink the Kool-Aid and ignore the fact that my daughter and mother are both in mortal danger resulting from your poor leadership. Although surely I would notice when your story changes daily even so. And you still frighten a meekly submissive Republican party that would gladly throw you under the bus (as you so gleefully do with them if they dare criticize you) if they believed that they would keep their positions of power and wealth in the next election.

Perhaps it’s time for those in congress who cower behind your abuses rethink their stance. Look at the backlash in last weeks Wisconsin primary. Even with only 5 of 180 polling stations in the democratic city of Milwaukee open citizens literally risked their lives to come out and vote against the party that betrayed them. Perhaps if those congressional members take a stand against what they know is wrong it will save them from the ignominy and shame that is the near certain fate if they don’t.

Yes, we need a plan to come back economically. Yes, it is critical. No one disagrees with that. But you are not the authority here, you have abdicated your leadership. Your inconsistency, irresponsibility and arrogance is appalling. Your bullying up until now has had a strange appeal and entertainment value – but as the nation sickens that appeal is fading.

We need a plan. A good plan. A consistent plan. A plan that doesn’t sacrifice long term business interests for your own personal shot term gains – gains that you somehow hope will assist your reelection. Yes, we need to reopen and emerge as a nation, a world, into the light. But your nearly casual disregard for the importance of the actual carnage that your temperamental rashness cannot be trusted to contain.

There will be death. There is already death at a scale that may have been prevented with timely action. Death that would have been lessoned greatly if time hadn’t been squandered, if warnings hadn’t been ignored. If the emergency contingency planning that you, Donald Trump, inherited with your office.

But here we are, and this is what we must work with. Death is already a daily number that we need to mitigate. This is an essential requirement to bring back and sustain the economy. Of course, you could order a grand opening on an arbitrary date, and there would be those who would celebrate it with a bang. It would undoubtedly flood a certain amount of wealth back into the system. But that would not sustain the economy. We went from less than 10 cases nationwide to our current numbers well over a half million in a number of weeks.  Imagine a starting point of hundreds of thousands of active cases rather than the very few we started from and how quickly those hundreds of thousands of active cases would escalate with a sudden easement of our current efforts. Where something as innocuous as a school assembly or a sporting event could be the next Mardi Gras – spreading the virus far and wide.

I doubt there is a perfect plan to guarantee our safety out there. We need real experts to gather and come up with the best strategy possible. One that mitigates death and brings us and the economy that we each contribute to from the ashes. Not those ‘expert’ being drawn from Mr. Trumps appointed department heads, chosen in many cases based on the disdain for their departments functions or based on loyalty to Donald Trump. Nor from his family, whose privileged lifestyles and educations in no way qualify them for anything other than running a family business.  No, Mr. Trump, leave things to the governors at this point. Governors run states. Governors are familiar with terms like public policy, as well as understanding the economic realities. Yes, they make mistakes – but rarely do they survive them in the next election. Several blocks of governors are working on such plans that will be worth following. Other states will follow – even the poorly run states will hopefully look into the light and follow. I suspect that most governors – even those that have made poor decisions so far such as Florida’s Governor DeSantis allowing the state to remain open for spring break season actually have Trump’s best interests at heart over the state he runs. And I find it hard to believe that at least some lessons have been learned.

So… to the governors – think of your people. That includes their businesses and livelihoods. Look at the science, and the economic future. Work with states around you. Carry on – and ignore the distractions.

To the Congress. Show some courage. Do the right thing.

Lastly to Donald Trump. Stop with the belligerent shape shifting. Back off the selfishness and bullying. Help the nation heal instead of poisoning it. Recognize facts – the real kind. Like that the steps taken now will determine the future. That no man single-handedly posses the knowledge or ‘gut instincts’ to see this through. This time it matters. Let the true experts lead. 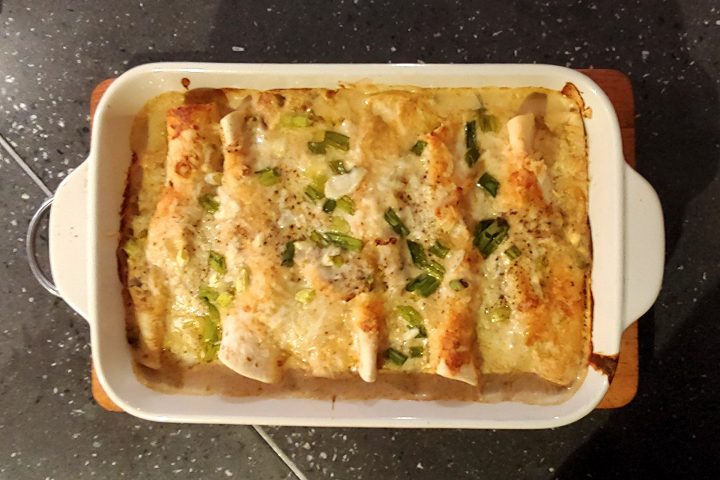 Heat the oil in a large enough skillet to contain the meat and liquids. Add onions and fry for a few minutes. When they are soft but not browned add your spices (cumin & cayenne). Continue frying until fragrant and the onion begins to brown.

While the onions are frying mix your thickening agent into a cup of the broth. If you are using xanthan gum note that this behaves quite differently than flour or corn starch. A little goes a long way and it does not require heat to thicken and takes a lot more stirring. Mix using a whisk or a fork until the agent is fully dissolved.

When onions are ready add all the broth including that mixed with the thickener to the pan. Cook until just slightly thick and the mixture bubbles. Add the cream cheese in a piece at a time and let it melt. Add the chicken, sour cream, and green chilies to the mix.

Spoon the mixture into lightly oiled tortillas. Line tortillas in a row in a greased 13 x 9-inch baking pan. Fill around with extra sauce. Sprinkle grated cheese on top. Back at 350 for 40 minutes. Cook with foil on for first half, remove foil for last half of cooking time. 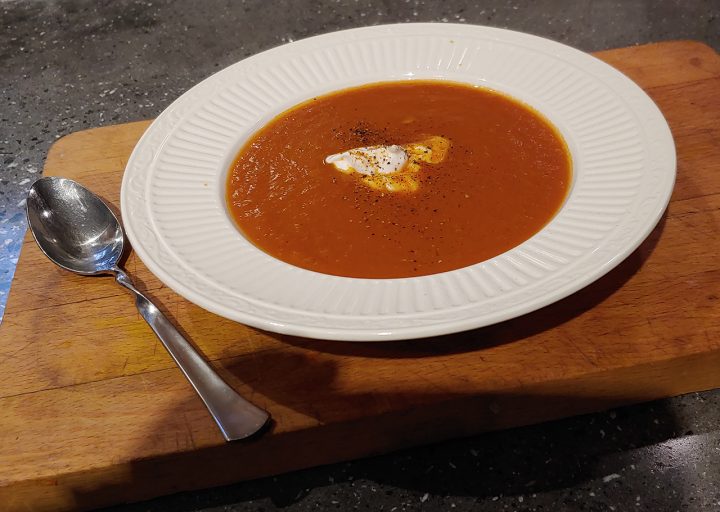 Squash & Tomato Soup was adapted from a New York Times recipe for ‘Turkish Pumpkin Soup’ by Martha Rose Shulman. It satisfies my desire for tomato soup – combined with the sweetness of allspice and cinnamon. Although I’m certain it would taste wonderful using broth and a different sort of canned tomato, I use my own bone broth made from scraps and bones in the instant pot and canned peeled San Marzano tomatoes (as part of my diet I avoid tomato peels and seeds as best as I can). Serve the soup with salt and pepper and if you like a dollop of yogurt or even cream cheese.

* This is not super low carb – it is moderate carb and depends on the ingredients used. Tomatoes and Squash both have moderate amounts of carbs in them and you really have to watch the labeling of yogurt. I’m very careful about reading labels before purchasing anything packaged. None the less, with care taken I personally still remain in a low level of ketosis most of the time. I estimate this contains approximately 11 g of carbs per serving using swerve (no sugar or honey) and without the topping.

On a cold winter evening when the world is just…sad there is always good food for comfort. This recipe does it all, and guilt free from a low carb standpoint. Here is one of my favorites. The leftovers from this are awesome in any number of dishes, and it takes only about 1 1/2 hour from start to finish.

2. Sprinkle lamb with salt and pepper on both sides, then turn so the side that had been on the bone(this will have an irregular surface), faces up, with the wider end facing you. Smear the surface of lamb with most of cream cheese mixture, then fold it in half so that it fits together with cream chesses on the inside. Tie if necessary. Sprinkle with salt and pepper.

3. Place lamb in roasting pan and cook for 30 to 40 minutes until rare (130 degrees) or medium rare (135 degrees).
It is best to have the thermometer inserted from the beginning – do not continually poke any piece of meat you are cooking as it will leave it dry and tougher.

4. Let rest on cutting board for 1/2 the time it roasted (this is good practice for any roasted meat) before slicing. Serve with fresh lemon wedges.

Had a stroke. Changed my life. Food. Art. Health. Activism.

Delete & Repeat is my artist reflection on living a healthy lifestyle, including creative expression and really good food. Its name is derived from a 2017 stroke that disrupted my life. ‘Delete & Repeat’ became a mantra of frustration for me as I struggled to organize my thoughts and communicate properly.

At the time I was a full time artist working in various new media, happily programming and creating electronic sculpture, interactive video & maintaining a full schedule travelling teaching, and showing.  The stroke effected my cognitive abilities and effectively shut down my career.

It took time and a complete change of lifestyle to recover. Primary to my effort was diet – I undertook a combination of keto with the addition watching inflammation to both lose weight and regain clarity. I added in regular exercise and yoga – and pursued a regular practice of research and learning.

In the food section I will post some of the recipes I live by. These recipes I follow my personal guidelines – they are not all super low carb (I currently stay in a low level of ketosis without the need to actually lose additional weight). In the health section I will include information and links to information that I come accross and see as potentially helpful, as well as things that I believe have helped me including exercise and yoga as well as cognetive practice in research and learning.

I am not a health professional of any sort so please do your own research. Where possible I will notate references.

After several years of effort things are paying off. I’m writing and working again. My art had been paused – it just recently picked back up. I have also renewed my commitment to activism – so important in the troubled world we live in. I intend on helping to right wrongs wherever I can. With my art – and whatever else I can find.

My Name Is Karen

This blog is meant to reflect me as a whole. I choose at this time to not publish my complete name – I’m just not there yet. I need the safety net of anonymity to protect my first real attempts at art again. Just call me Karen, but throw the name’s stereotype out the window. I am simply me.